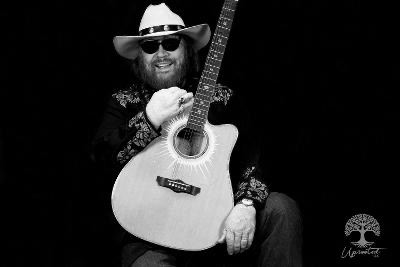 “All My Rowdy Friends” The One and Only Ultimate Hank Williams Jr. Tribute Show! If you like Hank Williams Jr., you will Love “All My Rowdy Friends” Performing since 2009 with a fan base that is Nationwide! Frank Morrow, better known as “Hank Jr. Jr.”, does what no one else does better when it comes to portraying Hank Williams Jr.! Everyone wonders if that is really “Ol Bocephus” himself they are seeing and hearing! Frank is unique in his portrayal of one of the most controversial American country singer-songwriter, and musician in the USA, Hank Williams Jr. With his realistic and natural Hank Jr. looks, sound and stage presence, Frank and his band “All My Rowdy Friends” gets the party started in high gear and keeps it rockin whether it’s a Biker Bar, Bike Rally, Annual Event, Festival, Private Party, Casino or a Rockin’ Country Club! After many years of being mistaken for Hank Williams Jr., and at the insistence of various individuals and the media, in 2009 Frank became the only authentic Hank Williams Jr. Tribute Artist. Frank has performed on many stages in many areas. Frank performs with his Nationally Touring band known as “All My Rowdy Friends” The Ultimate Hank Williams Jr. Tribute Band, that he formed in 2009. In 2011, Frank and his band took the winning spot at The Charlotte Music Awards as Best Country Tribute Band in North Carolina. Performances, to name a few include, Club La Vela, Panama City, Florida, Mazatal Hotel & Casino Payson, Arizona, House of Blues San Diego, California, The Ray Price Capital City Bike Fest, Raleigh, NC, Suck, Bang, Blow, Spring and Fall Bike Rallys, Murrell’s Inlet, SC.,The Beaver Bar, Murrell’s Inlet, SC., Myrtle Beach Bike Week West, Thunder In The Smokies Bike Rally, Maggie Valley, NC., Sand Stock, Virginia Beach, Va.,The Royal Palace Casino & Theatre, Roanoke Rapids, NC and the June Bug Boogie Bike Rally, Cookeville, Tennessee, The Shed Maryville, Tennessee and many other venues across the nation. Frank and his band can be seen on the websites, www.allmyrowdyfriendstribute.com, Reverbnation https://www.reverbnation.com/allmyrowdyfriendstheultimatehankjrtributeband Maximum Bands http://www.maximumbands.com/hank_williams_jr.html Musiczirconia, http://mztributebands.com/allmyrowdyfriends/589/hank-williams-jr You Tube ,or just Google to see “All My Rowdy Friends” the Nationally Touring High Energy Band!! Check them out for yourself! THIS HIGH ENERGY BAND IS AWESOME !! Book “All My Rowdy Friends” for your next Event!! You will NOT regret it! For more Information and booking” click “Contact” on the website…http://www.allmyrowdyfriendstribute.com.